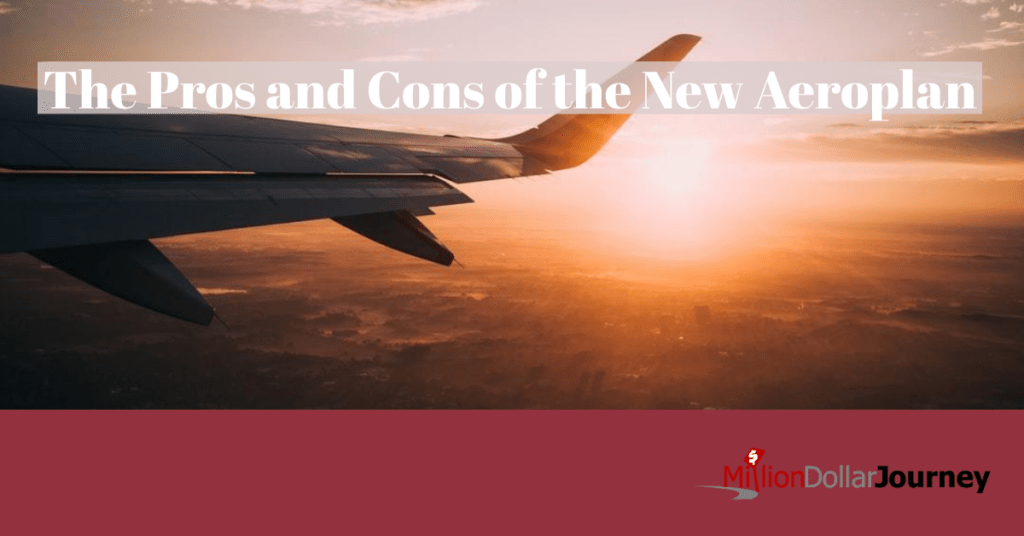 The new Aeroplan was just announced and there were a lot of changes. This wasn’t a minor refresh, it’s a complete redesign that will benefit most people, but there’s no denying that some travellers will be disappointed.

To give you some context, Air Canada was going to cut ties with Aeroplan (owned by Aimia at the time) to start their own loyalty program. Shortly after the announcement to split, another announcement was made where Air Canada would be purchasing Aeroplan. This was likely done since it would be cheaper to acquire the property as opposed to starting from the bottom.

With the loyalty program back in house, Air Canada was able to redesign things to their liking. Now that we’ve had time to analyze the changes, we’ve come up with a list of the pros and cons of the new Aeroplan.

Pro – The average traveller has been rewarded

As weird as it sounds, the current form of Aeroplan isn’t that friendly. It can be difficult to make redemptions, you can’t share your points without paying a fee, and there were high fees when making a redemption. The new Aeroplan is clearly designed to appeal to people who only travel once or twice a year.

Come November 8th, every empty seat on Air Canada can be redeemed with your points. This is significant because the old Aeroplan had very limited seat availability. Unless you wanted to spend a fortune in miles, you’d have to rearrange your travel dates or take less than ideal departure times.

Aeroplan will also be dropping carrier surcharges, but a fee of $39 applies if you’re booking with a partner airline (anyone who’s not Air Canada). This is important since carrier surcharges were downright silly in the past. If you were flying to Europe on Lufthansa, the fees would easily be $900+. No one would use their miles for that redemption when you could usually pay for a regular economy ticket for about the same price.

Air Canada was no different, if you were redeeming a flight within North America, the surcharges would be around $90-$150. The elimination of surcharges and every seat now being available will definitely make Aeroplan more appealing to the average traveller.

Pro – Families can pool their points

Under the new Aeroplan, you can create family sharing plans for up to 8 people. This is an interesting concept since you’ll now be able to pool your points. This is obviously beneficial since it’ll make redemptions a lot easier.

The old Aeroplan treated everyone separately even if they lived in the same household. A family of 4 who each had 5,000 Aeroplan Miles couldn’t redeem for much as individuals. With the new family sharing plans, they would have a combined 20,000 points. That could easily mean one free flight. The leftover points could then be saved or used for microredemptions such as lounge access or food on the flight.

The rules of family sharing are pretty interesting. The family members in the group do not need to be directly related, nor do they need to live at the same address. You can add whoever you want. That said, when joining a group, you can’t leave for 3 months. Once you’ve left the group, you can’t join a new one for 6 months. Those rules are in place to prevent fraud.

TD, CIBC, and American Express will continue to provide co-branded Aeroplan credit cards in Canada. Although the annual fee appears to be going up for all the cards, new benefits are being introduced come November 8th. Depending on which card you have, you’ll now get features such as free checked bags, lounge access, priority check-in, priority boarding, priority baggage handling, additional insurance, a NEXUS rebate, and more.

The free checked baggage is what will appeal to most travellers. Depending on where you’re flying, you could pay $30-$50 per checked bag, each way. For a family of 4, that could be $400 in baggage fees for a round-trip ticket. Getting free checked bags will easily offset the cost of your annual fee.

It’s also interesting to note that between the 3 providers, that’s more than 10 Aeroplan credit cards that you could apply for. Each of them will have their own welcome offer. I’m not suggesting you apply for all the cards at once, but there’s clearly an opportunity to earn Aeroplan points quickly.

Don’t forget, the points you earn with the American Express Platinum Card and the American Gold Rewards Card can be transferred to Aeroplan at a 1:1 ratio. It really wouldn’t be hard to earn enough points for a business class flight in a short period of time.

Although it’ll be easier to make redemptions for most travellers thanks to microredemptions starting at 1,000 points, it’ll likely now cost you more points to redeem a flight. The Aeroplan rewards chart has been completely revamped and now has four zones. How many points you’ll pay for a flight will depend on where you’re flying to, how many miles the journey is, which carrier you’re using, and the time of year.

This new zone/miles based system creates some sweet spots for western Canadians and short-haul travellers, but many routes will definitely cost you more points. When you really analyze the chart, some economy routes now cost 40% more points while business class seats are easily 15%+ more.

There’s no denying that this devaluation is disappointing, but it’s important to note that loyalty programs need to make these changes from time-to-time since it’s their way of factoring in inflation. It’s not realistic for consumers to expect flight redemptions to stay the same or to drop all the time.

Like any loyalty program, including retail ones such as PC Optimum, it’s up to the consumer to see where their points get the most value at any given time. Right now, there’s some good value for flights to Hawaii, Mexico, and the Caribbean.

Another new negative (but expected) feature coming to Aeroplan is dynamic pricing for Air Canada flights. Under the new chart, there’s a range of points required when redeeming your points on Air Canada. The lower end of the chart represents flights that have less demand while the higher end would be for high demand flights.

We don’t have enough information yet to determine how many seats are at the lower end vs. the higher end, but Air Canada has gone on the record saying that availability on the lower end would be similar to what’s available now. We’ll have to see how things play out, but if it’s only flights that depart on a Tuesday afternoon that require fewer points, or every flight during the summer is considered peak, travellers will be very disappointed.

That said, you can use this dynamic pricing to your advantage if you’re a flexible traveller. Remember, every seat is now available so you might be able to grab something in business class for a reasonable number of points.

Even though the new rewards chart has value for some travellers, anyone living outside one of the major cities in Canada could be at a huge disadvantage. For example, someone who lives in Atlantic Canada and wants to go to Europe or Asia would usually have to fly to Toronto or another major hub first to reach their final destination. Since you have to double back, you’d be adding a fair amount of miles to your journey.

This is important since the points required to make a redemption also factor in how many miles you’re physically travelling. Adding those miles to get to a hub may put you into the next distance band threshold which means more points required for a free flight.

For the average traveller who travels once or twice a year, there’s a lot to like under the new Aeroplan. Frequent flyers and travel hacks will be disappointed with the changes. Regardless of where you stand, you should always focus on redemptions that get you the most value. In most cases, that’s not gift cards or merchandise. If you’re still upset with the changes, forget about points/miles and switch to a cash back credit card.