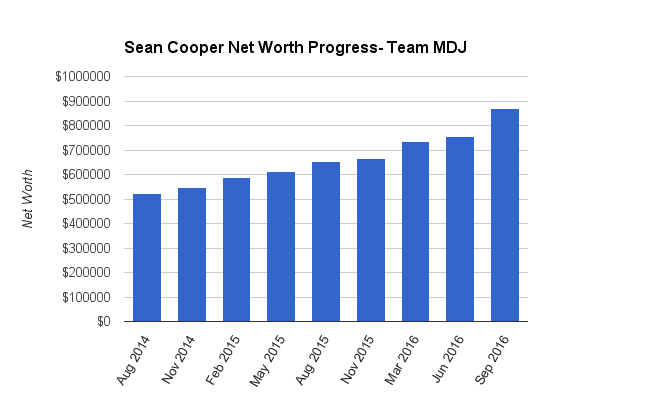 Welcome to the Million Dollar Journey September 2016 Net Worth Update – Team MDJ edition. A select group of readers were selected to be part of Team MDJ which was conceived after the million dollar net worth milestone was achieved in June 2014. Sean Cooper was selected as a team member and will post net worth updates on a regular basis. Here is more about Sean.

These last three months have been busy, even by my standards. Between my full-time job, my side hustle as a financial journalist, money coaching, Toastmasters (I’m on my sixth speech) and writing my book, I’ve barely had a moment to rest. I had to take a brief hiatus from going to the gym because it got to be too much, but I’m happy to say my schedule has slowed down slightly and is more manageable once again.

When I’m not at my full-time job, every spare moment is spent on my book. I’ve tweaked the title slightly – it’s now “Burn Your Mortgage: The Simple, Powerful Path to Financial Freedom.” After getting some helpful feedback from my friends, I rewrote a large portion of my book. The first draft was decent, but it just wasn’t the motivational, uplifting book I was looking to write. I realize most people aren’t willing to live without a smartphone like me (more on that later), so I’ve offered simple, practical advice most people can follow . My main message is that you don’t have to give up Starbucks and your iPhone to achieve financial freedom, but you do have to be smart on big purchases like a home and car.

Now that I’ve finished with the editing of my book, it’s onto the design. I happy to say I recently signed a deal with a trade distributor to get my book carried at major bookstores across Canada. This is a good first step, but there’s a lot more to be done. The success of my book will depend on positioning. To that extent, I’m hiring a PR firm. The book is tentatively set for release on March 1, 2017, so stay tuned. That may sound like a long way away, but there’s a lot of planning and work going on behind the scenes to ensure it’s a success. My dream of being a published author is almost a reality!

Since I paid off my mortgage, I finally broke down and bought a decent smartphone. Previously I had a BlackBerry Z10 (or as I like to call it, an “antique”). It was fine for a while, until I decided to write a book. I want to be active on Instagram and guess what? Instagram doesn’t support BlackBerry, so I broke down and bought a mid-range Android phone. Since I don’t have data on my phone, I bought a wireless router for $40. If you don’t have a wireless router at home for your smartphone, rush out and get one right away. It literally pays for itself in a month in the amount of data usage you’ll save on your phone. So far, so good with my new phone. I’d love to support a Canadian company like BlackBerry, but with their app support so bad, I had no choice but to switch to Android. I’m sure I’m not the only one who feels this way.

I’m really looking forward to my trip to San Diego for in September for FinCon. I’ve never travelled before (besides a trip to Wisconsin on the Greyhound bus), so I had no idea how costly the trip would be. The trip ended up costing me under $1,000, including flight and hotel – not bad! I could have saved more money by staying at Airbnb, but decided against it since my accommodations would be quite away from the conference (staying at the hotel at the conference will make it easier to network). It’s a four day conference, but I plan to arrive a little early to check out California and (hopefully) hit the beach. Readers, have you ever travelled to San Diego? Do you have any recommendations of places to visit?

I’m still trying to figure out my whole philosophy on travelling. My father being diagnosed with Parkinson’s disease last year was a real wakeup call. He planned to travel later in life, but now he can’t due to his illness. He ate well and exercised regularly. He had no way of knowing he would get sick. I don’t want to put off travelling my whole life because you never know when you could become sick too. Our health is something we often take for granted, but after my father’s health scare, I won’t make that mistake again. Going forward I’ll aim to take one big trip a year. With the Pound taking a tumble from the fallout of Brexit, maybe I’ll visit the U.K. next year. We’ll see.

On to the net worth numbers:

Some quick notes and explanations to common questions:

My savings are held in a savings account with Canadian Direct Financial. I mainly use my savings account as an emergency fund and to save towards the balance owing when I file my personal income tax return at the end of April. Even though I contribute the maximum to my RRSP annually, I still have a large balance owing to the taxman since I receive rental income and income from self-employment (I’m a freelance writer).

How Did I Pay Off My Mortgage in Only Three Years?

Due to the number of comments in Sean’s last net worth update, Sean has provided a more detailed explanation of his strategies.

Update August 2016 – Despite an annual salary of $55,000 when I paid off my mortgage in September 2015, I was able to pay off my mortgage in three years by age 30 through side hustle. I got the idea from the host of HGTV’s Income Property, Scott McGillivray, to live in the basement of my house and rent out the upstairs, earning $18,600 per year in rental income. By renting out half my home, half my housing related costs (mortgage interest, utilities, home insurance and property taxes) are tax deductible. I also worked part-time at a grocery store once a week, earning $5,000 per year.

I’ve received a few questions about how I was able to pay down my mortgage so quickly. It was mainly through my freelance income. I tend to be conservative with my estimate of freelance income, as it can vary a lot from month to month. For example, some months I earn $2,000, while others I earn $5,000+. For 2014, I ended up earning over $60,000 in freelance income (including my full-time job and rental income, I made over $130,000 before taxes in 2014). To help offset the taxes payable on this income, I claim home office expenses and maximize my RRSP contributions each year.

Through freelance income, I’ve been able to maximize the prepayment privileges on my mortgage. I made accelerated mortgage payments of $850 per week (most of this money went toward principal since my mortgage rate was only 3.04 percent). I also made a total of $38,250 in lump sum payments each year (15 percent of my original mortgage balance of $255,00); this money went straight toward the principal on my mortgage. I made lump sum payments whenever I received rent from my tenants or freelance writing cheques.

While I was paying off my mortgage, I lived super frugally, cutting my expenses to a bare minimum. The two most costly expenses for most after mortgage/rent are food and transportation. I spent only $100 per month on groceries (it helps that I’m a vegetarian). I also spent less than $1,000 a year on transportation by cycling to work.

My real estate holdings consist of my primary residence. I purchased my house in November 2012 for $425,000 with a mortgage of $255,000. As I live in Toronto, one of Canada’s most expensive housing markets, I’ve based the value of my principal residence on comparable properties that have recently sold in my neighbourhood. I also increase this number based on my property assessment value, which I receive every four years.