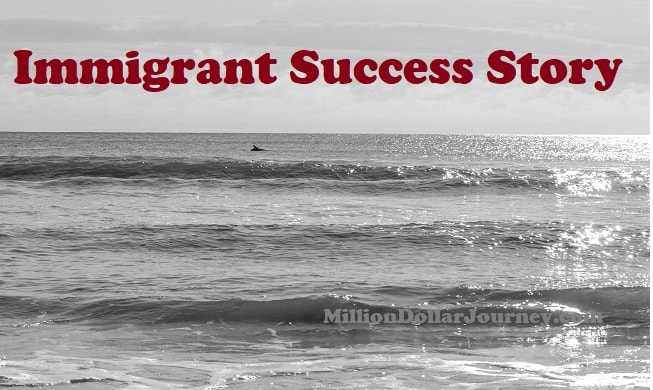 I wrote this post a few years ago, but found it in the archives and thought it deserved some attention.  Check it out!

Calvin and his spouse Beverly immigrated to Canada in the early 1970’s (both in their mid-late 20’s).  While people move to different countries all the time, the couple came to Canada under a number of challenging circumstances.  They arrived with very little understanding of the English language and into a city that was predominately English speaking.  They had very little money in their pockets (about $500 Canadian), no work lined up, and to top it off, they had an 11-month-old baby (and pregnant on another).

They left their home country and moved to Canada for its reputation as the land of opportunity and as a safe place to raise kids.    While both Calvin and Beverly did not have any post-secondary education, they had a strong work ethic.  Both of them started work in their home country at a very young age, younger than imaginable by today’s standards.   Calvin, as the oldest 8 siblings, started his first job in a factory when he was 13 years old to help support his family.

Fortunately, when they arrived in Canada, they had a connection to a relative of a relative who owned a small service-based business.  Although an entry-level job, Calvin was grateful for some work in the new environment while Beverly stayed in their modest apartment with the baby.

It wasn’t long before they grew tired of renting and wanted a place to settle down and call their own. So in the mid/late-1970’s, they found a place for sale in the downtown core that had a convenience store on the main floor (street level) and an apartment above.

They jumped on the opportunity but it came with a catch, a high-risk mortgage with a 23% interest rate! Although the payments were onerous, they managed to keep their heads above water. Beverly would run the convenience store, while Calvin would continue working at his entry-level job to keep cash coming in the door.

Calvin’s parents immigrated to Canada as well to help out with the kids and moved in with the four of them in the small apartment above the convenience store.

Calvin and Beverly were entrepreneurs at heart so they enjoyed running their own business. Although their means were conservative, they lived a frugal lifestyle and made saving a priority. After a couple of years of saving, Calvin took the leap and joined 4 other partners to start a risky small business.  To start the business, Calvin and his wife had to put their life savings on the line, all while expecting their third child.

With four children and grandparents to support,  their next residence needed to be a little bigger.  They put the proceeds from selling the store towards a modest house with 3+2 bedrooms. Business remained steady and saving remained a priority which enabled them to raise their children in a frugal but comfortable middle-class lifestyle.

With savings accumulating, it wasn’t long before the couple started buying income-producing real estate assets for the long term.  First, a two-apartment house that was close to a local college.  Then they decided to sell their principal residence but keep it as a rental.  They did this a couple times until settling in a nice property in a quiet neighborhood.

In addition to their own properties,  Calvin and Beverly partnered with a friend to purchase a few more properties over the years, including a small commercial unit.

Investing in the Market

He taught his kids about the power of compound interest over the long term.  He even convinced them to start investment accounts while they were in their teenage years.  In addition to lessons about investing, the kids learned about work ethic where they all worked in the family business.

While the business had its up and downs over the decades, their saving and investing habits allowed Calvin and Beverly to retire in their early 60’s.  This is while raising four children and putting them through University (co-op work terms helped).

Even though they gave up their main source of income, their retirement is currently funded through rental and investment income, and a small amount of CPP and OAS.  In alignment with their conservative nature, they made sure to retire without any debt.  They still maintain a modest lifestyle spending their time with their grandkids, a local church, and some travel.

Putting it All Together

Calvin and Beverly’s story is truly an immigrants success story that includes challenges that would instill fear in the best of us. They show that financial freedom and a comfortable retirement is possible even when the odds are stacked against you.

Their ticket to financial success was not just starting a business, but how they lived modestly and saved to buy long-term income generating assets.  A concept and strategy that I believe is the easiest and most consistent way for the everyday working person to build serious wealth.

I’m proud to say that Calvin and Beverly are my parents.

It all makes sense now!

Interesting to note the mindset of immigrants vs born-and-raised; the former most often valuing money and the latter valuing time. As a second-generation FT manages to see the value of both.

Also interesting the generalized work ethic of immigrants vs born-and-raised; past and present hardships seem to develop an innate drive to succeed. I know one of my personal role models is an immigrant woman who is more man than most men! Her single focus is to be a millionaire so she can “own her time”. There’s no doubt she’ll achieve that goal.

On an end note, I think the power of family is very, very often overlooked as a prime driver of financial success (as well as other forms). If you have a diseased tree, the apple has to fall exceptionally far in order to avoid the blight.

Reading through this article, I was thinking it was either an extremely elaborate made up story with some salient financial advice in the end, or a very personal true story.
Our parents definitely shape who we end up being and how successful we are. Sometimes we become successful because we saw their hard work, perserverance and frugality, sometimes we see them work hard but ineffectively at dead end jobs and we desire to do better. Lots of different ways they can influence you, some direct, some leading by example, others showing how not to do it.

Great story. First generation immigrants are always so inspiring in what they’ll do to get their families ahead. Congrats to them.

I have no doubt my parents played the major role in developing my attitude toward personal finance. But not in the way as this article. My parents were lower-middle class, debt ridden, one with an alcohol problem, and both with gambling problems. When I was young (about 12), I had a paper route and both would occasionally borrow money from me to ‘pay some bills’. Only when I was a teenager did I figure it the money went either to the bingo hall or the liquor store.

My mother passed away in her 60s, my father is in his early 70s and still has serious debt and gambling problems.

If my parents taught me anything, it was a perfect example of how not to live your life.

I’m now in my mid 30s, work as an engineer, am completely debt free (including a 4 bedroom house free and clear) and have an investment portfolio almost equal to the price I paid for the house.

So yes, family absolutely has a huge impact on how you handle your finances.

And I wonder why you know this story with every detail, and then I totally understand, they’re your wonderful parents. Thanks for the inspiring post!

Thanks for sharing – loved the twist at the end! I never clued in that it was a personal story but as other commenters mentioned, the level of details was uncanny :-)

Thank you for sharing that great story! Immigrants have been one of the driving forces behind Canada and US for the past 4 – 5 centuries. Successful immigrants always strive to do something practical with their skills/time, which has a high probability of generating cash flow

Thanks for sharing this inspirational story. Being an immigrant, many of us left homes and loved ones behind, so the need to succeed is usually a driving force, when it comes to handling one’s finances. In most cases too, you have other people depending on you financially for a better future.

I think that it really helps a lot when you learn and experience the money habits from people close to you. Seeing that your parents worked so hard for their money, it would probably motivated you to the same.

I was raised by immigrant parents too and I understood at a young age that they worked really hard, but earned very little. Seeing that money was hard to come by, I made it my goal to support and earn my own money as early as I can. This goal had served me quite well and I am glad that I set this goal at an early age.

Awe perfect timing for Father’s Day! Your parents did a good job raising a financially savvy son! Our parents dealing with 20% mortgage rates is commendable.

Thanks for this great sharing. As a first generation immigrate, I can relate to lots of your parents’ story. When I first went to university here in Canada, I cannot understand the professor and I got only 4 out of 10 with my first in class quiz. We are luckier in the sense that we have higher education and got decent middle-class jobs not long after we arrived. But we certainly worked very hard and lived under our means. We had kids after we are financially worry free so I am wondering if we have spoiled the kids a little bit with tons of legos and pokemon cards etc.. I think they will not live a life as frugal as us but hopefully they will learn about saving and investing better than us.

Reply
FT
Author
Reply to  May

Hi May, it’s a tough balance between giving children the opportunities that you didn’t have but also teaching them about what it takes to buy the nicer things in life. I know one thing for sure, the grandparents certainly spoil the grandkids. :)

Thank you for sharing the inspiring story. As a child of immigrants, I too feel the sacrifices my parents made to keep my brother and I sheltered, fed, and clothed. Although both worked labour jobs throughout their lives, they were able to own their home and send both my brother and me to university with the message to do better than them. We both do and learned from their work ethic and value of a dollar! I only hope we can do the same for our children.

Thanks for stopping by Gigi!