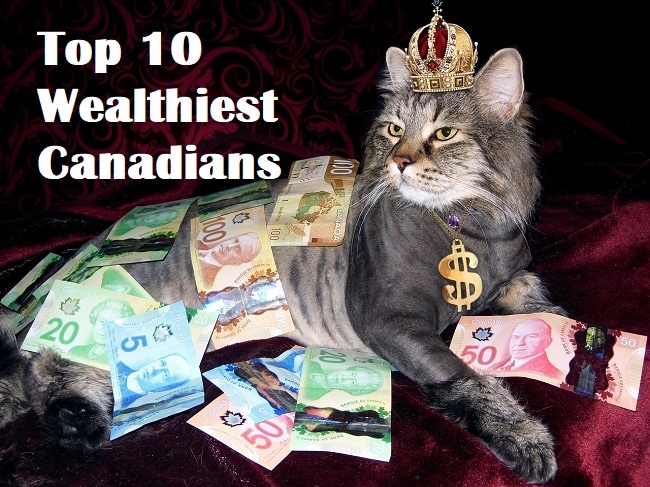 This post was originaly written in 2009 (yes 2009!) and I thought it would be interesting to see how and if things have changed over the past decade.  Do the rich continue to get richer?  Are there new editions to the list of super wealthy Canadians?

We’re constantly inundated with news about Jeff Bezos, Bill Gates and many other Silicon Valley billionaires, but who are Canada’s richest people? Well there’s plenty of Canadian billionaires, unsurprisingly. Here’s a look at the 10 wealthiest.

The Thompson family have been Canada’s wealthiest people for a long time now. In fact, their 2009 status was $21 billion, which would still put them as Canada’s richest even 11 years on. The family control Thomson Reuters (TSX:TRI), a media conglomerate that owns many media companies — and is of course the most prestigious new organization in the world.

Tsai is the vice chairman, and co-founder, of e-commerce giant Alibaba. The revenue of Alibaba is the 5th largest in the world. Tsai also owns 49% of the National Basketball Team Brooklyn Nets. Technology stocks are some of the fastest growers and they hold a lot of cash, so it’s no surprise to see Tsai in the top 2.

Outsiders may not know them, but every Canadian will have shopped in one of Weson’s stores. Loblaws, Real Canadian Super Store as well as No Frills are all owned by the same family. The grocery and retail company was founded by George’s grandfather, but by no means was he passive in its success.

Whilst the previous three were all inside the top 200 global richest, James Irving is the first outside of this category. $7 billion is no small feat, though, which he has accumulated from the companies acquired by J.D. Irving, an umbrella corporation. You will have likely stopped by at one of these gas stations, as Irving’s largest asset is Irving Oil.

The Richardson family has a long history of eclectic businesses from selling farmers’ grain to supplying oil and gas. The family had actually expanded its energy holdings with a $1 billion purchase when facing weak oil prices in 2014. The company also has a partnership with True North Sports and Entertainment.

Cheriton’s success is somewhat more unusual than the others: he invested $200,000 in Google when it was just starting out (1998). Cheriton is a computer scientist teaching at Stanford University, and whilst he is a venture capitalist, much of David’s fortune comes from Google’s success.

Jim Pattison is a 91-year old Canadian business magnate. Jim is based in Vancouver where he holds CEO and sole-ownership of Jim Pattison Group, Canada’s second largest private company. The group has overseas companies in entertainment, food and many other industries.

Saputo was the CEO of Saputo, the Montreal-based dairy company, until his retirement in 2017. Saputo is the most well-known dairy company in Canada, which was founded by Emannuele’s father who only had $500 and a bicycle to deliver the products.

Chip (Christian name Dennis), is a Canadian billionaire who has founded several apparel companies. The most famous of which are Lululemon Athletica Inc. who focus on yoga-inspired athletic clothes. Today, Chip is no longer in his CEO position at Lululemon and only now owns 9% of the company.

Scheinberg is an Israeli-Canadian businessman in the real estate and hospitality industries. Mark is a relatively young billionaire at 47. Mark saw a lot of his success from co-founding PokerStars, a huge online gambling company which he sold in 2014 for $4.9 billion. Since then, Mark has been expanding into different industries instead.

The top 10 list has a broad selection of self-made billionaires and inherited companies — but you never have to go back many generations before the fortune was first built. Even with the billions in the bank, none of these billionaires are retiring before their time. They all enjoy expanding their businesses, growing and getting involved with projects that mean a lot to them.

What do all these guys have in common?  Besides a lot of zeroes in their bank accounts, they all started and/or run successful businesses and from various profiles that I’ve read, and they all enjoy what they do.  Even with billions of dollars in assets, billionaires continue to grow and add to their assets.  Maybe there is some truth in the saying – if you’re not growing, you’re dying.