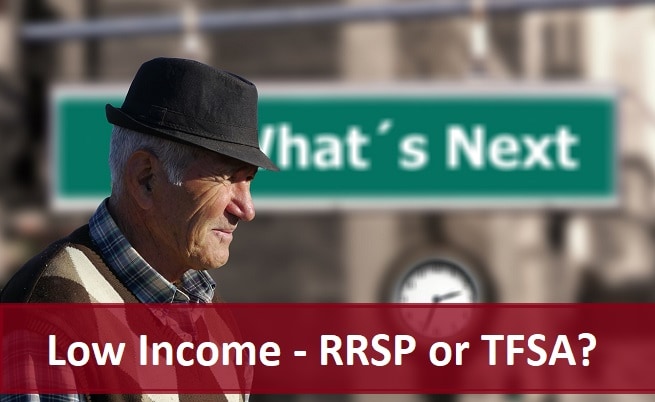 A reader emailed me recently about being a low-income senior, but with some savings ability and was wondering if it makes sense to start an RRSP or a TFSA.

The email did not include a lot of details, but for the most part, my answer would be the same – TFSA.

The next question is why?  The reason lies in seniors benefits and the clawbacks that result when certain income thresholds are met.  For low-income seniors, they would likely qualify for additional benefits, and any extra income (like from RRSP withdrawals) could result in clawbacks of those benefits.  Whereas income generated from a TFSA does not count as income and, most importantly, does not test government benefits.

For low-income seniors, a large portion of their income would come from Old Age Security (OAS), some from Guaranteed Income Supplement (GIS), and maybe some from Canada Pension Plan (CPP).

Let’s dig a bit into these programs.

Old Age Security is a (Canadian) government program that pays a monthly benefit (adjusted to inflation) to seniors ages 65 and over.  OAS is paid out of the current Government tax base (unlike CPP) and is counted as taxable income.

To qualify for this program has nothing to do with if you’ve worked in Canada but how long you’ve lived here.  According to the OAS website, here are the qualifications:

For 2019, the maximum OAS benefit is $7,289.52/year.  To receive this, you would need to have lived in Canada for 40 years after the age of 18.  Anything less than 40 years results in reduced benefits.  As mentioned above, these benefits are adjusted to inflation which means that they increase over time.  To put this in perspective, the maximum OAS benefit was $6,481.44/year in 2011.

Here is an example:

What is GIS and the GIS Clawback

GIS quickly gets reduced by $1 every $2 earned (yes, even CPP) and eliminated at around $18k in net income (for single people); $24k for a married/common-law couple (both OAS pensioners); and, $43k if one spouse is not receiving OAS.

The following would be eligible to receive GIS in April to June 2019:

Here is a nifty online calculator to determine GIS amounts.

If you have worked in Canada after age 18, and paid into CPP, you can expect some sort of CPP benefit as early as age 60 and as late as age 70.  The more that you can delay CPP, the higher the payout.  In fact, if you can push collecting CPP until age 70, the payout would be 42% more than the payout at age 65.

The average CPP payout is currently $680/mo or $8.1k/year with a maximum payout of $1,154.58/month/person or $13.8k/year/person.  As you can see, if you are a single low-income retiree that manages to qualify for an average amount of CPP, a significant portion of GIS will be clawed back.

To figure out how much to expect for CPP, this is one of the more accurate CPP calculators that I’ve come across.

Putting it all Together

Again, check out the calculators listed above to run some of your own numbers, and how your income will look during retirement.

If you are interested, I wrote a recent article about how I plan on withdrawing from my RRSP/TFSA during early retirement.