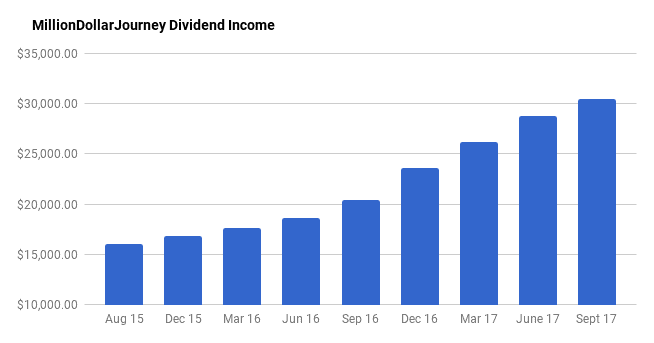 Welcome to the Million Dollar Journey September 2017 Financial Freedom Update – the third update of the year.  For those of you new here, since achieving $1M in net worth in June 2014 (age 35), I have shifted my focus to achieving financial independence.  How?  I plan on building my passive income sources to the point where they are enough to cover our family expenses.  All within the next  3.5 years.

If you would like to follow my latest financial journey, you can get my updates sent directly to your email, via Twitter (where I have been more active lately) and/or you can sign up for the monthly Million Dollar Journey Newsletter.

In my first few Financial Freedom updates, I talked about what life has been like since becoming a millionaire, why I like passive income, and our family financial goals going forward.

Here is a summary:

Our current annual recurring expenses are in the $50-$52k range, but that’s without vacation costs.  However, while travel is important to us, it is something that we consider discretionary (and frankly, a luxury). If money became tight, we could cut vacation for the year. In light of this, our ultimate goal for passive income to be have enough to cover recurring expenses, and for business (or other active) income to cover luxuries such as travel, savings for a new/used car, and simply extra cash flow.

Reaching this goal would mean that my family could live comfortably without relying on full time salaries.  I would have the choice to leave full time work and allow me to focus my efforts on other interests, hobbies, and entrepeneurial pursuits.

To give you context for this update, here are the numbers in my previous financial freedom update.

Since June, there has been a significant change to our financial position.  In a recent post about retirement income sources, I hinted about job instability within the provincial government (NL).  Well it happened, I was laid off, but accepted a lower paying temporary position which gives me an opportunity to apply for government jobs as they come up.

The whole situation has me pondering my career and life in general.  I generally tend to look at things from a positive perspective where I firmly believe that when one door closes, at least two more open.   When I look back at major turning points in my work life, things have always worked out for the better.

If I didn’t join my previous engineering employer (I had a choice of three employers), I wouldn’t have met a co-worker that pushed me in the direction of starting this blog.  This site has been such a big part of my life that I honestly cannot imagine what my life would have been like without starting MillionDollarJourney.com.

So, now what?  For now, I stick with the temporary job and look for opportunities that interest me.  I’ve even contemplated early semi-retirement where we live off dividend income supplemented with part-time online and/or contract work.  The laptop lifestyle with full autonomy does have a certain appeal to it.  In fact, it’s how I imagine life when we hit our passive income goal.  Whatever happens, I’ll keep you updated within these financial freedom update posts.

Now, let’s talk a bit about my passive income strategy – generating dividend income. As dividends are the main focus of my passive income pursuit, there is a large dependence on the market. While there are merits to this investment strategy, there are also substantial risks – particularly dividend cuts.  As an example, you may have heard about what happened to Home Capital Group (HCG).  This is a secondary lender who had a very strong track record of dividend increases (18 years in a row).  HCG funded their mortgages through client deposits into GICs and high-interest savings accounts.  With the company under investigation, client essentially made a run at the bank and essentially wiped out HCG’s high-interest savings balance.   To help stop the bleeding, HCG obtained a very expensive line of credit.   The deal was so expensive that it could end up wiping out a full year of earnings.  In light of this, the company suspended their dividends in May.

In addition to the dividend raises, I’ve continued to deploy cash into dividend stocks.  I’ve been a bit slower deploying corporate cash his quarter, but hope to continue moving forward this coming quarter.  Since this is currently my largest investment account, it also adds the most weight to my overall holdings.

In my overall portfolio, here are my current top 10 largest holdings (besides cash):

Through a combination of deploying cash and collecting those juicy dividend increases, this quarter has been decent with a 5.74% bump in dividend income.  While the growth is good, at this point, it’s looking less likely that I’ll hit $35,000 in dividend income by the end of the year.

We still have a long way to go to hit $60k, but for the most part, we are moving in the right direction in hitting the midway point of my longer term goal.  There is still cash available to deploy in most of our accounts. In particular, the lump sum of cash from the commuted values of the pensions has started to be invested but still a lot left to deploy.

We are also in the process of ramping up our non-registered account to invest in more dividend stocks (setting up another account with MDJ reader favorite  Questrade).  That’s in addition to the dividends that are constantly being churned out which gets deposited as cash and reinvested again (the power of compounding).

The biggest risk or uncertainty right now is the coming changes to the way that passive portfolios will be taxed within private corporations.  The good news is that existing portfolios will get grandfathered rules, but this will require some further tax planning down the road.

If you are also interested in the dividend growth strategy, here is a recent post on how to build a dividend portfolio.  With this list, you’ll get a general idea of the names that I’ve been adding to my portfolios.  If you want a simpler investing strategy that outperforms most mutual funds out there, check out my top ways to index a portfolio.

Let me know if you have any questions by leaving a comment.

Oh, and don’t forget to check out my presentation at the Canadian Financial Summit starting September 13.  It’s is 100% free for the first 48 hours after the video goes live.