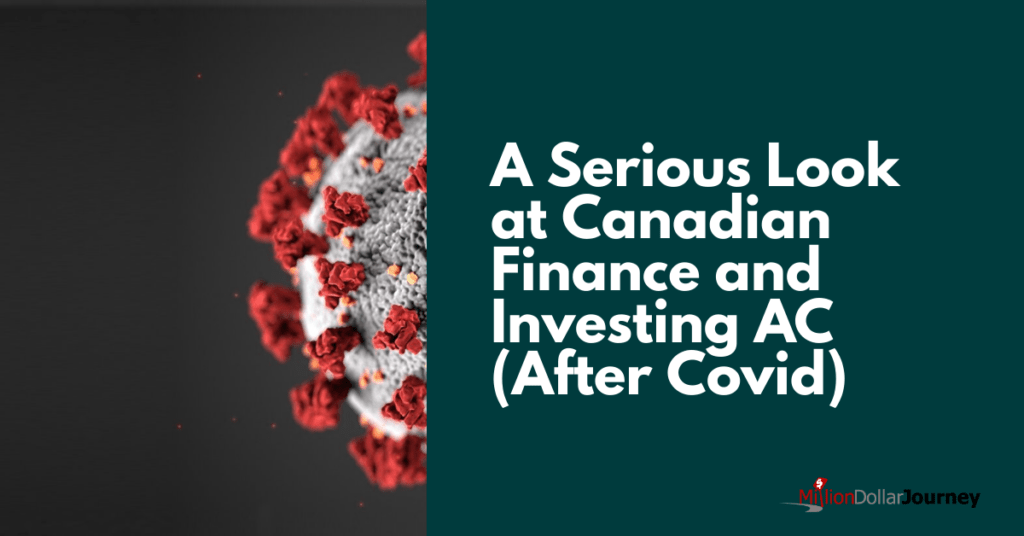 Humour and money are not the most important topics at the moment.

People using war analogies to describe the fight against this nasty bug don’t seem to be exaggerating when you see numbers like that.

My attempt to distract people with gallows humour in our Covid-19 article last week was well received by some, and not-so-well by others.  I apologize if my attempt to illustrate the illogical nature of “sell it all” was a bit much for some folks.

Consequently, I thought we’d come back this week, in the midst of the human tragedy, and take a look at the impact on your personal finances and investing accounts that this pandemic will have.  Obviously it should go without saying – but I’m saying it anyway – that money should not be your foremost concern right now. That said, financial considerations are always part of the overall equation when looking at worldwide pandemics, and Covid-19 is no different in that regard.

On the investing front, my friend Mike Heroux over at Dividend Stocks Rock is Hosting a special Free Webinar tomorrow (Friday) exclusively for Million Dollar Journey readers who are interested in looking at bargain-priced dividend stocks.  Click here to sign up now.

In addition to the investing ramifications, the Trudeau Government made some major personal finance waves yesterday as they sought to stem the negative recessionary spiral by juicing the economy with $27 Billion in new spending for Canadian families, along with $55 Billion in support for the business world.

This is on the top of the previous liquidity and medical support funding that the Trudeau Team announced last week.

Here’s a quick look at most notable aspects of what the emergency support might mean for your personal finance situation.

So businesses aren’t getting handed 55 Billion Dollars – at least not yet.

Keep your eye on this one!

As of right now, the government is proposing that we allow businesses to defer payment of taxes on an interest-free basis until September.

Additionally, credit at preferential rates is being made available to businesses of all sizes (with a special mention to farmers).

This money will all still have to be paid – the idea is to give companies some breathing room while the worst of this crisis passes.  It will be interesting to see if this tax money is eventually paid, or if the government quietly gives the companies a one-off tax break for this time period.

The Prime Minister was quick to point out that this $82B package represented 3% of Canada’s GDP, and consequently, was a very strong commitment to helping Canadians stay afloat throughout this pandemic.  He also commented that due to a relatively small current budget deficit, Canada had the fiscal room to borrow money at the current low rates, and still move forward. There is obviously some room for disagreement on that assertion, but there is no doubt that this government is spending MAJOR money to try and keep the Canadian economy from going completely off the rails.

It’s important to note that for both individuals and businesses, there is a difference between a recession where the economy contracts 3% over 6 months – and a recession where we see prolonged contraction of 5%+ over 2+ years.  When the economy shrinks that much, for that long, it puts pressure not only on paycheques, but also on the entire government social safety net. Tax rates creep up, services and benefits get cut, businesses have a harder time getting started, and overall, it just becomes very difficult to get the big economic machine moving in the right direction again.

The headline news yesterday was that Canada’s Big Banks will be giving people a 6-month holiday on their mortgage payments.

Now, please understand, this DOES NOT mean that someone is going to pay your mortgage for you for the next six months.

Here’s what the banks had to say in their official press release:

“We have made a commitment to work with personal and small business banking customers on a case-by-case basis to provide flexible solutions to help them manage through challenges such as pay disruption due to COVID-19; childcare disruption due to school closures; or those facing illness from COVID-19.”

What’s important to note here is that no one is saying that interest won’t accrue during that 6 months, AND that it is a deferral – NOT a personal bailout.

The banks want to give Canadians the financial space needed to avoid bankruptcy, but no shareholder in these turbulent times is going to sign off on simply forgiving loans.  Overall, this is a useful little policy tool, and it will particularly help Canadians who are laid off or having difficulty finding work over the next little while.

Buried Under the Lede…

Perhaps some of the most interesting news (as opposed to simply tragic) that I read yesterday was this article by Canadian mortgage guru Rob McLister.

Rob recommends locking in a variable interest rate with a sweet sweet discount rate kicker (Ex: “Prime -1%”) IF you can get someone to pick up the phone.  This is primarily due to the fact that fixed rates are likely to start creeping up any day because of worries about increase default rates.

Apparently when Canadians are bored they do the same thing they do when they’re busy – try to buy houses!

Rob states that lenders are completely swamped right now trying to push mortgages and refinances through with limited staffing options.  My takeaway was not just that it is a great time to look at refinancing, but that this activity is actually a very positive sign for the Canadian economy overall.

Also of note was his prediction that HELOC rates are about to go up – even though the Bank of Canada’s rate is going down.  This is simply due to lenders getting nervous that folks won’t pay them back and anticipating an increasing number of defaults.

Investing During the Pandemic

While my tone may have been a bit off last week, my point that no one knows what the overall economic picture will look like three weeks from now, let alone 12+ months down the line, was fact-checked and turned out to be true.

My personal guiding principle is that we know to some degree what the final result of this tragedy will be: In 18 months (hopefully sooner) we will have herd immunity as a result of our bodies defeating the virus and/or vaccine-based immunization efforts.  At that point businesses will slowly (or quickly) go back to “normal”.

The real question that I have is what will the secondary effects of the world chaos be over the next 18 months?  Here’s a few questions a person would have to propose answers to if they wanted to predict the future:

Overall, from a financial point of view I think the only logical response right now is to take a deep breath, and then go back and read the investment plan that you put together when you started investing.

If you read our article on all-on-one ETFs or Questrade vs Wealthsimple article (where we look at the psychology behind index investing) you’ll note that we always talk about planning for the long term, and the worst case scenarios that might occur between now and the day you withdraw your last investment dollar.

If you are in semi-panic mode due to impending retirement concerns, please take a thorough look at the detailed article we created on Safe Withdrawal Rates in Canada for Any Age to find out what the realities of your portfolio will be.

Finally, remind yourself that ultimately investing is the stock or bond markets is NOT the same thing as placing a bet in a casino.  Those stock prices that are going up and down in a seemingly random pattern right now are not some weird VLT game. Stocks are real pieces of real companies that will make (or in a few cases “not make”) money every day going forward.  Ultimately those companies are still worth a lot of money. There are many questions that need to be answered before we all agree just how much money each company is worth, but as a group, the world’s largest publicly-traded companies are massive behemoths that employ the smartest, most-motivated minds in humanity.  They collectively own an unimaginable amount of wealth, assets, intellectual property, and know-how. These companies will continue to make money 18-months from now – if not much sooner – and owning a piece of those companies will be a good thing.

Now go do your duty as a responsible Citizen of the World: Wash your hands and re-watch your favourite Friends episode!

I really enjoyed it and liked the simplicity of seeing what the governments plan to do here in Canada.

No one knows what will happen tomorrow, but its safe to say in the long term we will learn from it and things will be back to normal.

As a landscaper, I can say I’m worried a bit about the upcoming season. Will people want to spend money like they used to? Or will they better their financial picture and pay down their debts and save?

So far we have been getting some calls for work the last week but not any huge jobs yet.

Our company is basically debt free (owe 10k on a truck) but all the other trucks and equipment are paid for. In a way this may eliminate all these fly by night landscape companies, or could increase them.. Time will tell.

wish you all the best.
cheers!

Thanks for all of your posts, which take work and your time. I was in the ‘understood you were joking – and got it right away’ camp for your ‘sell it all’ post. I guess people are super sensitive, but your headline was very catchy.

Thanks Deb – appreciate that!