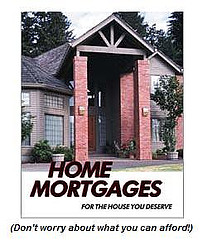 With the introduction of the 40 year mortgage in Canada, people who couldn't afford a home before can now own a home due to lower monthly payments.

With the huge difference in total interest paid over the term, one would think that it would never make sense to go with a 40 year term.  Hold on though, there are advantages and disadvantages of the 40 year mortgage.

If you can afford it, I'm an advocate of lower amortization mortgages as longer terms result in drastically higher interest.  However, if you need to go with the 40 year amortization for the cash flow, I would suggest that you take any extra money during the year and put it down on the mortgage as that will help decrease the interest burden in the long term.

In my opinion though, if you can't afford a 25 year mortgage on the home that you want, then the home is too expensive.

For those of you who tend to be more literal, the photo is meant to be sarcastic.